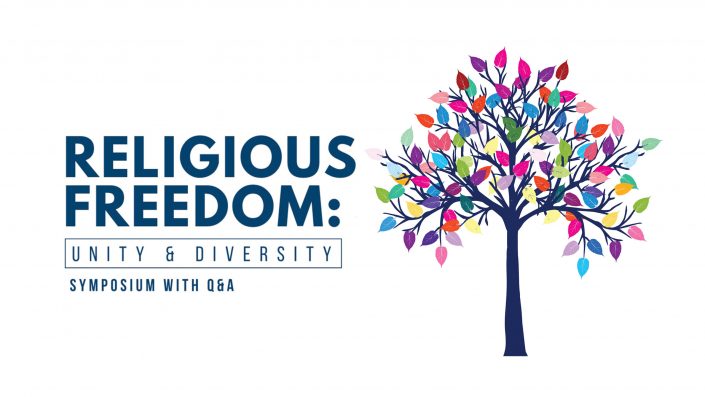 The Chapel, Australian Centre for Christianity and Culture

Join our expert panel discussion as we explore issues relating to religious liberty. Wednesday 24 October from 6:30pm at the Australian Centre for Christianity & Culture.

St Mark’s National Theological Centre, together with City Bible Forum and the Australian Centre for Christianity and Culture, will assemble a group of experts representing various religious convictions and none to discuss issues relating to religious liberty in a multicultural and socially diverse Australia. Such issues include belief; education, teaching and preaching, and medicine and social services.

The symposium will be opened with remarks by the Hon. Philip Ruddock and Director of St Mark’s, Rev’d Dr Andrew Cameron.

16/10 edit: Unfortunately, due to recent developments, including the selective leaking of the Religious Freedom Review report to sectors of the media, the Hon. Philip Ruddock is not able to open an event on this topic until the review’s report is made public. Regardless, we are grateful to Mr Ruddock for his initial support.

Rev’d Dr Andrew Cameron will be chairing the panel discussion.

Shireen Morris of the Cape York Institute, when writing about Australia Day, argued for the need to “better include all Australians”, to “bring together our Indigenous heritage, our British inheritance and our multicultural character”. But for many Australians, this kind of national unity seems only more elusive given our social diversity.

The recent marriage plebiscite has prompted debate on religious freedom, currently referenced in our Constitution and in various clauses to Acts of Federal Parliament. But has the time come for a Commonwealth ‘Religious Freedom Act’? Is such an Act necessary to guide us on “how competing rights and freedoms are to be balanced when they appear to come into conflict” (Keith Thompson)?

The Religious Freedom Review, chaired by the Hon. Philip Ruddock, delivered its report to the former Prime Minister, the Hon. Malcolm Turnbull MP on May 18, 2018. Anticipating the release of this report, this panel has been assembled to discuss the ability of all Australians to live according to their religious convictions in both their professional lives and the wider public square, and to contribute to the common good.

This panel will explore the current constitutional and legal arrangements as these apply to religious groups in Australia and how these are applied in a wider context with reference to international human rights instruments.

Our panellists will discuss the ways in which we might balance competing fundamental rights and freedoms in a multicultural and multi-faith Australia, with particular reference to recent discussions about children’s education and gender identity.

In addition, our panel will address other topics, including, but not limited to, the rights and obligations of religious groups with reference to the recent Royal Commission into Institutional Responses to Child Sexual Abuse.

The panel will conclude by discussing how further discussion and recognition of religious freedom might contribute toward the common good of all Australians.

Dr Thompson has enjoyed a wide and varied career in the law with experience in property, commercial, international, constitutional, criminal and human rights law. He worked for 11 years in Auckland in commercial and property law including 6 years as a partner with Fortune Manning and was then appointed as International Legal Counsel for The Church of Jesus Christ of Latter-day Saints. In that role, Dr Thompson supervised that Church’s legal work through the Pacific Area (for 18 years) and then through the African continent for a further 2 years.

Since returning to Australia in 2011 he has been appointed as Associate Professor and Associate Dean at The University of Notre Dame Australia’s Sydney School of Law where he teaches Constitutional Law, Law and Religion, as well as some Evidence and Contemporary Legal Issues, but he retains an interest in legal practice through his continuing part time role as Special Counsel at Taylor and Whitty, a regional firm with offices in south-western NSW and northern Victoria. In 2010 he published a book entitled Religious Confession Privilege and the Common Law. He has also published on Insolvency, Vicarious Liability in Tort, Foreign Corrupt Practices and Freedom of Religion.

Professor Pauline Ridge is an internationally recognised private law scholar and a Senior Fellow of the Higher Education Academy. She has published on six occasions in one of the world’s leading journals, the Law Quarterly Review.

Her articles and book chapters concerning equity, restitution and contract law are read and cited by judges and commentators across the common law world. She co-edited Fault Lines in Equity (Hart Publishing, 2012) and is co-author, with Professor Joachim Dietrich, of Accessories in Private Law (Cambridge University Press, 2015). The book provides an analytical framework and doctrinal exposition of accessory liability, referring to all common law jurisdictions, with an Anglo-Australian focus. It will assist judges, practitioners and scholars to understand a neglected liability that is extremely important in legal practice. Her doctrinal and historical research into legal regulation of religious financing is also highly regarded and published in leading journals such as the Melbourne University Law Review and the Journal of Legal History.

Pauline has given interviews, written opinion pieces and made government submissions concerning the reform of religious charity law. She is a former Director for the Centre for Commercial Law at the ANU College of Law and member of the Charity Law Association, Australia and New Zealand. In 2013 she was a Visiting Fellow, Asian Law Institute, National University of Singapore.

Pauline studied at the Australian National University (where she received a University Medal) and the University of Oxford.

Asmi is Sub-Dean (Indigenous) at ANU College of Law. His expertise is in Aboriginal and Torres Strait Islander Law; Comparative Law; Legal Theory; Jurisprudence and Legal Interpretation; and Religion and Religious Studies. His current research and publications include areas such as Constitutional Recognition of Indigenous people in Australia and Indigenous Participation in Higher Education. His PhD was in the area of International Criminal Law/ Humanitarian law and examined the legality or otherwise of the use of force by non-state actors under international law and in cases, domestic Australian law.

The Australian Parliament, both Committees and individuals, Government agencies, community organisations, schools and Indigenous groups have all used Asmi’s research to clarify key issues among staff, have invited him to speak at their public events and make contributions to their literature. Asmi has presented several keynote addresses to large conferences interested in Indigenous issues including on issues such as ‘recognition’.

He was made a Principal Fellow of the Higher Education Academy in 2017, was the recipient of the OLT Australian Award for University Teaching: Neville Bonner Award for Indigenous Education in 2015, and also the ANU Vice-Chancellor’s Award for Teaching Excellence in 2010.

Christopher Hartney is a senior lecturer in the Department of Studies in Religion at the University of Sydney, where he studies and teaches the myths of modernity, religion and violence, civil religion, and new religious systems. His main research focus is on new religions in East Asia and Vietnam in particular. Presently he is working on translations of major texts from the new Vietnamese indigenous religion of Caodaism. A former editor of Literature and Aesthetics and the prestigious Journal of Religious History, Chris has also edited numerous scholarly editions and has published over 50 peer-reviewed papers. His latest publication (edited with Daniel J. Tower) was Religious Categories and the Construction of the Indigenous for Method and Theory in the Study of Religion (Brill, 2017).

Stephen Pickard is Executive Director of the Australian Centre for Christianity and Culture; Director of the Strategic Research Centre in Public and Contextual Theology and Professor of Theology, Charles Sturt University, Canberra, Australia. He is also an Assistant Bishop in the Anglican Diocese of Canberra & Goulburn. He grew up in the Hunter Valley in the Diocese of Newcastle and worked at BHP for a number of years before training for ordination in the Anglican Church.

He has served in a range of ministerial and academic appointments over 37 years in Australia and the United Kingdom. Stephen was Head of School of Theology, CSU for 9 years. He is deputy chair of the Archbishop of Canterbury’s Standing Commission on Unity, Faith and Order (IASCUFO) and chair of the Ministry and Mission Commission of the Anglican Church of Australia. In 2011 he was installed as a Six Preacher Canterbury Cathedral. His teaching and writing is in the area of ecclesiology, ministry and mission and includes Liberating Evangelism (Trinity Press International 1998); Theological Foundations for Collaborative Ministry (Ashgate 2009); In-Between God: Theology, Community and Discipleship (AFT 2011); Seeking the Church: An Introduction to Ecclesiology (SCM, 2012).

To order your tickets, you can apply online through the link below or just call our front office on 02 6272 6252 during office hours, Mondays to Fridays. Prices are as follows:
Buy tickets