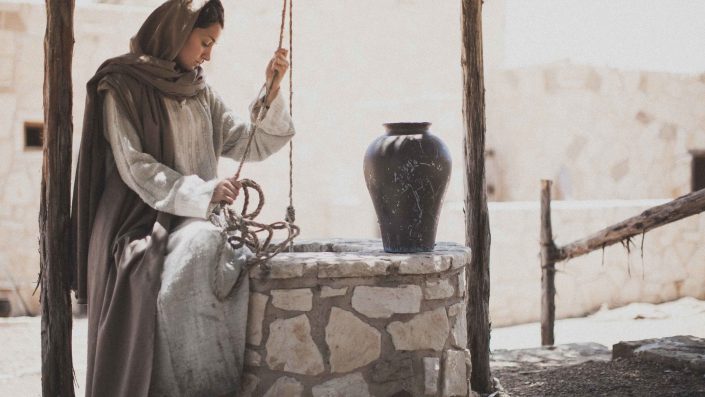 Tactical withdrawal from the threat of The Pharisees, through this ghetto called Samaria.

A pivotal moment in Jesus’ mission, as a woman becomes the bearer of good news to people who are not Jews. It has the same theological significance as Jesus’ encounter with the Syro-Phonecian woman in Mark’s Gospel, or the similar passage in Matthew with a Canaanite woman, both of whom are the first to hear the gospel for the Gentiles.

It doesn’t sound good to us. To our ears, he commands a woman to serve him, then seems to big-note himself.

We need to notice, though, hers and later the disciple’s surprise that he even speaks to her. The request for water is a kindness of sorts, an acceptable way to engage with her.

And when she queries it, he suggests that if she knew to whom she was speaking, he would ask him for water — which I take would be even more unheard of. And as it happens, of course, she does.

She doesn’t quite get it, Jesus’ move from liquid water to living water. Maybe that is because the time is still coming when people like her will worship in spirit and truth, not according to place. Jesus hints at what, for her, would be a major shift in who to be before God. She begins to get it, though, even as she rushes off to the townspeople with talk of a Messiah.

For our purposes, though, in a place theologically further from Jerusalem that Sychar, consider Jesus’ call to her: just ask me. Just ask me for water, so you’ll never thirst again.

I picture these people in struggle, forging an identity at their mountain of worship, held in contempt by Jews, and hauling that water. There are equivalent if different struggles for us. But Jesus says: if you know the one you are talking to, just ask me for water.

And consider that evocative promise, that “the water that I will give will become in them a spring of water gushing up to eternal life.”

I find myself wondering about this gushing spring, the fullness of that. What is it? What does it feel like? Like the woman, I don’t completely understand. like her, I want it, never to thirst again.

I was at an event last week where we were asked to see that our true country, is God. That is something like this. The Father is looking for those who worship him in spirit and truth, in whom living water gushes.

Jesus, sir, give us this water, so that we may never be thirsty.