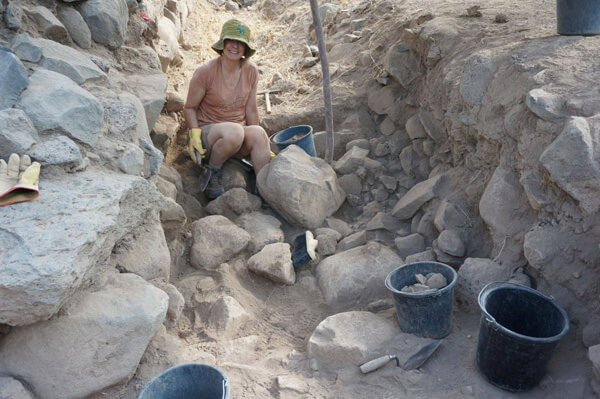 We’re excited to announce that a CSU Theology Bethsaida Program is now being planned for June 2019.

Over the past decade CSU students have had the opportunity to travel to Israel and participate in the Bethsaida Excavations Project. Rev Dr Greg Jenks, an adjunct in the CSU School of Theology, was part of the Bethsaida Consortium, and led several groups of students on a study tour of Israel including time at Bethsaida. The tours were not available for two years because the University of Nebraska at Omaha (UNO) terminated its sponsorship of the dig and new support was being sought. This year new sponsorship was found through the Hebrew Union College in Jerusalem and digging recommenced.

The Bethsaida site was discovered by Dr Rami Arav, who still directs the Bethsaida Excavations Project. It was Dr Arav who first proposed that the ancient mound (tel) on the northern shore of the Sea of Galilee, an area he used to play in as a child, was the biblical Bethsaida, home to Andrew, Peter, and Philip, Jesus’ disciples (John 1:44). When archaeological work began on the site, remains were found not only of a first century fishing village, but also a fortified Iron Age city, thought to be Geshur, capital of a neighbouring kingdom in the time of King David of Israel and home of his wife Maacha. The site thus has important connections for both Old Testament and New Testament studies.

There are, in fact, several layers of settlement at Bethsaida: the tenth century BCE city, an eight century BCE city, a prosperous Greek-speaking community from the third century BCE, a Jewish community in the Hasmonean and Herodian periods, occupation in the Early Roman period (the New Testament era), settlement in the Mamluk period, and a village in the late Ottoman period. Excavators have found artefacts such as flints, ancient fired potsherds, colourful Ottoman pottery, oil lamps, coins, fish-hooks, sacrificial animal bones, along with monumental architecture including the largest and best preserved set of eighth century city gates and fortification towers from the Iron Age period. A well-preserved stele with the image of a moon-goddess that was found at Bethsaida has pride of place in the Israel Museum in Jerusalem.

In 2018 as the digging was recommenced under new sponsorship, efforts were concentrated in two main areas: the tenth century city gates, and the floor of the Roman temple. When I was there in 2015 work had just begun to find the tenth century gates. On our last day of digging, just before packing up the project for the season, a large stone slab was found that indicated the site of the gates had been located. Since then, a paved courtyard, two towers flanking the entrance, a series of chambers behind it, and spacious palace have been uncovered. It will be exciting to revisit the area and see how much progress has been made in the intervening seasons.

Participation in the Bethsaida Excavations Project, while hard work, is incredibly rewarding and one way in which CSU’s study trip to Israel is enhanced beyond a mere sight-seeing trip to the Holy Land. Look out for updates on planning for the 2019 Theology International Study Experience.