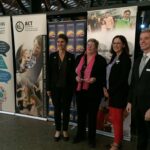 St Mark’s would like to congratulate student Delia Quigley for winning the ACT Senior Volunteer of the Year Award for her work with Diversity ACT at the 2018 Volunteering Awards.

St Mark’s counselling student, Delia Quigley, received the award on 22 May at the 2018 Volunteering Awards from Volunteering Australia, in recognition of her years of dedication to a completely volunteer-based organisation that works to support a community that, in her words, “most people still think of as ‘Others’.”

LGBTIQ people are often still afraid to approach mainstream services. They are still rejected by their parents and end up couch surfing and homeless. It is extremely difficult for Transgender people to find accommodation. Some LGBTIQ people have anxieties that won’t allow them to leave their homes very often.

As President of Diversity ACT, does “everything, really” — from training organisations, mentoring students, managing placements and referrals, to gardening and mowing, and opening the doors — quite literally.

In her role, she has taken people shopping, written letters to housing, listened to the bereaved, and supported those subjected to violence, harassment and discrimination. During the last few years, Delia has also mentored a number of Youth Work or Community Services students who have undertaken student placements with her and they, in turn, have become volunteers upon completing their placements.

Delia is also an Elder at her church and together with Diversity ACT, her church has created a partnership to form the Rainbow Christian Alliance to meet the needs of many LGBTIQ people who have been, and are still, hurt by churches. They now have two groups — one at Erindale and one in Goulburn.

Delia was a former member of the Australian Federal Police for 31 years with experience in a range of areas including investigations, community policing,  family violence and victim liaison.  She had also served on several UN and international policing missions, some of which had been very harsh missions in places like Haiti, Timor Leste and Sudan. Her passion for working the LGBTIQ Community was apparent even in her time with the AFP: she wrote and conducted AFP Gay & Lesbian Liaison Officer (GLLO) training workshops and presented to AFP Diversity networks at national and international conferences.  As a former GLLO chair, Delia was a strong, influential voice for diversity within the AFP. She also served on the AFP Diversity Council.

Since leaving the AFP, Delia dedicates most of her time to Diversity ACT and conducting LGBTIQ training for organisations. In the last 3 years, she has also been involved with the Kairos and Emmaus communities. Her work with LGBTIQ Christians sees her travelling to Goulburn twice a month. Delia also currently volunteers with Lifeline in the area of telephone crisis support.

Delia completed her Diploma of Counselling at St Mark’s in 2017 and is currently undertaking the Graduate Diploma in Relationships Counselling.

I have found that the skills from my training at St Mark’s has certainly helped me with interacting with others in doing client work and also found that some of the skills from the Dip Counselling assisted with my telephone crisis support. I was less stiff about sticking with the processes (although still doing them) but found I had a better communications style and connected better. I am currently getting some extra practical experience assisting in doing some Health & Wellbeing group work along side a Social Worker; she has commented at how much my skills in working with others has improved since I have been studying!

Other aspects of the courses that Delia has enjoyed include “the VET style of learning, the people that I have met, the support from fellow students, and the encouragement of staff including the Director!”