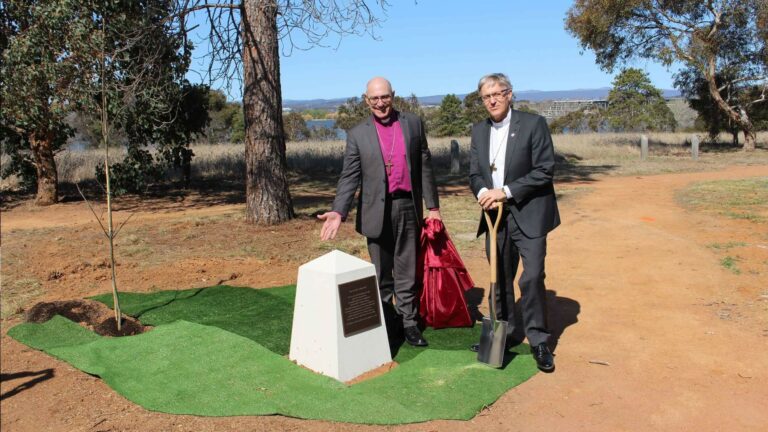 Remembering the 500th anniversary of the Reformation

Last Monday 18 September, we welcomed several representatives of the Lutheran Church of Australia to St Mark’s, along with +Stuart, our own bishop. Together we planted a tree.

This was St Mark’s way of recognising the five-hundredth anniversary of the beginning of the European reformations that all began when one Martin Luther banged up ninety-five ‘theses’ onto a church door in Wittenberg, Germany. (Actually he did so on October 31st 1517, but we got in early.) These theses were basically ninety-five gripes with the church of his day. They began,

‘When our Lord and Master Jesus Christ said, “Repent”, he willed the entire life of believers to be one of repentance.’

Of course, you say. That’s obvious. Jesus was a person of integrity; as if he’d have meant anything else? But when you read these ninety-five theses (some are easy, some are hard), it becomes clear that in his day, people had ‘mechanised’ repentance to a one-off act here, a ritual there, and even a purchase or two, to get you off the hook. Our understanding that Jesus meant the-whole-of-your-life has come to us partly through Luther.

But why a tree? Luther is reputed to have said “If I knew the world was to end tomorrow, I would still plant an apple tree today.” Alas, there’s no proof that he said it. But the quote has stuck, and there has been a long tradition of ‘Luther Oaks’ particularly in Germany. I wanted St Mark’s to become the Australian site for the Lutheran Church of Australia’s participation in the Luthergarten project centred in Wittenberg.

We also had six short talks on the significance of Luther and the Reformation, centring on the famous quotation from Romans 1:17 that ‘the righteous will live by faith’. We celebrated what Luther brought to us about faith in Christ, while also lamenting the massive schism in the church that resulted from his insights. We will publish these speeches in a forthcoming edition of St Mark’s Review – stay tuned.

Afterwards, Dr John Harris of the Bible Society of Australia introduced an amazing collection of Bibles dating from the sixteenth and seventeenth centuries—a torrent of publication arising from the Reformation instinct to make the Word of God intelligible to all. John’s favourite, and a highlight for me, was the first Bible printed in Saxon in 1571. It highlighted that there were those in the British Isles who were ‘reformed’ long before the ‘Reformation’.

The tree is pretty cool. We hope it grows big, and reminds all who see it of repentant faith in Jesus.