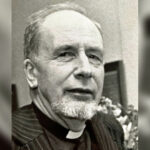 John Nurser was the Warden of St Mark’s Institute of Theology (now St Mark’s National Theological Centre) from 1968 to 1974. He died in the United Kingdom on November 16th 2020.

I have been pondering how to mark his passing. A comprehensive obituary by the Church Times outlines his life at  I have also appended below an outline of John’s life, kindly provided by the Rt Rev. Prof. Stephen Pickard, my colleague at the Australian Centre for Christianity and Culture. The video of his funeral service below includes readings from Psalm 46 and 1 Corinthians 15 name the hope given to us by Jesus Christ.

After reading those pieces, I borrowed from St Mark’s library and cracked open John’s books mentioned there. They are the work of an erudite and accomplished scholar, yet also laced with a passionate intent to prove the inestimable impact of Christian thought upon the development of Western polity. He began with the study of a major figure in political thought, Lord Acton; and went on to show how, after World War II, Christians and Christian thought were integral to the growth of the international human rights movement.

But let us admit: it can be hard to connect with the memory of a figure dating from a half-century ago.

I thought, then, I should share with you the way John maintained an ongoing interest in St Mark’s. Not long after I began as Director, he reached out with several kind and supportive emails. Even though we never met in person, I miss him.

My first contact with John and his wife Elizabeth was in 2016, when they donated to St Mark’s Rare Books collection an Erasmus Novum Testamentum, written in Latin and printed in Basel in 1549. It was given to the couple as a wedding present, on 30 August 1956, by Elizabeth’s uncle, a Genevan professor. It is a truly amazing gift. ‘It is a wonderful example of the way that private devotion (for those who could afford it) had come to require as normal a personal copy of the NT’, as John put it to us.

It was in that connection that John also supplied us with his own story of his time at St Mark’s, which he intended to go on record. I have also added it below, exactly as sent. It will take a little while to read, but it gives a glimpse of a vision for St Mark’s that gripped John, just as it still grips me.

John mentions people and places that some of us have heard of, and even knew. (I was delighted to learn, for example, of Mrs Sulman, after whom one of our main teaching spaces is named.) John’s short memoire offers a significant historical window into St Mark’s and Canberra in these stretching yet formative years. (John on a little bit of a sad note, recalling of his departure from St Mark’s that ‘there was not much more I could achieve with the resources available’. But it’s worth remembering that only four or five years later, in 1978, Bishop Warren began the ‘College of Ministry’ at St Mark’s, the fledgling training place for Diocesan clergy. That became an essential ingredient of the modern St Mark’s. John did his bit to get us there.)

Over several subsequent months, John maintained an occasional correspondence with me, tapped out quite laboriously, one suspects, by his ninety-plus year-old fingers. He heartened me considerably:

I fear it’s unlikely we can be good correspondents. However, we wish you and St Mark’s staff well, and remember you in our prayers. Thanks for sending programme information. It appears that St Mark’s is still splendidly active, and is still in a uniquely strategic national position.

A few years back saw a necessary reduction in St Mark’s funding—an important one, at the time—as Bishop Stuart and his colleagues strove to offer a tiny token of recompense to those sexually abused by former clergy. In his emails to me John was generally pretty reserved, the perfect English gentleman. But not so on this occasion:

As you can imagine I feel angry that so much creative work and difficult hanging-on to a remarkable vision over the last 80 years could be put at risk of failure by the sordid actions of these guilty clergy. I pray that a determination to preserve these unique contributions to the national church scene will figure prominently in the minds of Synod.

John clearly left St Mark’s a better place than he found it (with no disrespect intended to those who went before him, each of whom had similar pressures). This is all we can ask of someone in any workplace or ministry.

He also represents a form of faithfulness. His ongoing attention to St Mark’s, and his oft-mentioned prayers for us—despite that he knew so few of us personally—are highly unusual, in an age where one’s ego and past hurts can tend to make us cut ourselves off from our past associations.

He also indicated the hope that he will be remembered to those connected with St Mark’s. I hope this e-news does the job. But John’s ongoing affection to us had already ensured that we would remember him.

Here is the first and last verse of the opening hymn at his funeral:

All my hope on God is founded;
he doth still my trust renew.
Me through change and chance he guideth,
only good and only true.
God unknown, he alone
calls my heart to be his own.

Still from earth to God eternal
sacrifice of praise be done,
high above all praises praising
for the gift of Christ his Son.
Christ doth call one and all:
ye who follow shall not fall.

John Nurser wrote his doctoral work on Lord Acton, published as The Reign of Conscience (Garland, New York, 1987). He was a canon emeritus of Lincoln Cathedral; he was dean of Trinity Hall, Cambridge, warden of St Mark’s Collegial Library in Canberra (1968-1974), and then chancellor of Lincoln Cathedral, from where he was founding director (1989–1997) of the organisation Christianity and the Future of Europe (CAFE). After retirement he continued work on human rights as a fellow of the Human Rights Centre of the University of Essex, publishing For All Peoples and All Nations (Georgetown University Press and WCC Publishing, 2005). He died 16 November 2020.

In His Own Words

I was told about the vacancy at St Mark’s by John O’Neill at Westminster Coll (a Melburnian close to the ecumenical group in Ormond Coll) while I was Dean of Trinity Hall. I’d been attracted by Australia a year or so before, when the wardenship of Trinity Coll, Melbourne was vacant. My father’s family was of ordinary English stock, but I knew that his father’s cousin was Alfred Deakin, who’d invited him to go out to Victoria with his new bride in the 1890s (but she’d said ‘No’).

I applied and was invited to accept, so we left on the 5-week voyage (Suez was closed) at end of August 1968. I was an only child, and my mother came with us ‘to help settle us in’; together with George (11), Isabelle (9th bday on board), Henry (7) and Louise (2). The picture I’d received was of a gathering of three forces for a ‘national’ and ‘ecumenical’ breakthrough at St Mark’s. All of them to be tracked back to Bp Burgmann’s ‘vision’. Bp Clements (and his assistant Bp Warren) felt personally responsible to rescue St Mark’s from continuing decay, sitting on this prime public space. It was a time of enormous energy at the National Capital Development Commission. However, as well as this church initiative, there was a ground-breaking decision at the ANU to appoint a chair in religious studies. And, in the grounds of St Mark’s, there was an advanced project by Australian Frontier, chaired by Sir James Darling and with a Director appointed (fresh from running a leading laity centre in Zambia). This would have major provision of accommodation and meeting rooms, and live at the inter-face between politics and faith.

Quite soon it became clear that Bp Clements was forced to put St Mark’s aside in his fund-raising in favour of Burgmann Coll at the ANU. And the Frontier project and the ANU’s ‘religion’ faculty dribbled away into the ground. It has been a satisfaction to me that versions of these two have since become established: the university connexion with Charles Sturt, and the socio-political work at the ACC&C. But it did leave me and the St Mark’s Council with a much-diminished possibility and few funds. The loyalty and commitment of our supporters was remarkable – but the ‘national’ dimension rarely resonated outside the diocese, esp in NSW and Victoria. Yet those were the years when national associations were founded for theological studies and for ministerial education, in which St Mark’s played its part.

I think we played as good a game as we could, with Stan Davies and Laurie Murchison at its core. But by 1973, it seemed there was not much more I could achieve with the resources available. My mother felt she had to go back to see after her house. We were gazumped as we tried to buy a house in Reed. So we took study-leave and left for England at the end of the year – constantly unsure whether we’d return or not. It was a heart-breaking decision, esp after we had the news of Stan’s disappearance at the coast.

I don’t know whether there is folk-knowledge about our time. Here are some notes:

My mother had the happiest days of her life. She joined a ‘Wednesday Group’ of mostly Methodist ladies who went out into surrounding bush once a week to paint, and then exhibited at St Mark’s. One of these ladies, Mrs Sulman, was persuaded by my mother to donate to St Mark’s – hence the ‘Sulman Room’.

Our children went to Forrest Primary and then to CGS and the Girls’ Grammar. They had a good education. It was strange for them living on a large open space with no other children around. George loved watching the stars.

We had an old Lithuanian gardener, Peter. And a splendid dachshund, Adelaide, with a voracious appetite for public servants’ unused sandwiches.

Elizabeth was occupied by 4 children, and then began to serve as a research assistant at the ANU, first in demography, and then to historians (her own subject). Her work with John La Nauze on the correspondence between Walter Murdoch and

Alfred Deakin was so close that he invited her to co-publish it with him (J.A.La Nauze and Elizabeth Nurser, ‘Books and Men’, Melbourne UP 1974)

I was keen to establish St Mark’s in the consciousness of the ANU, and the National Library. I was asked by the ANU’s Centre for Continuing Education to be Director of their Summer Schools in Religion. I became a Fellow of Burgmann College. Together with Prof van der Sprenkel of the ANU we founded the Canberra Society for the Study of Religion and Theology, which held lectures and was run from St Mark’s. “