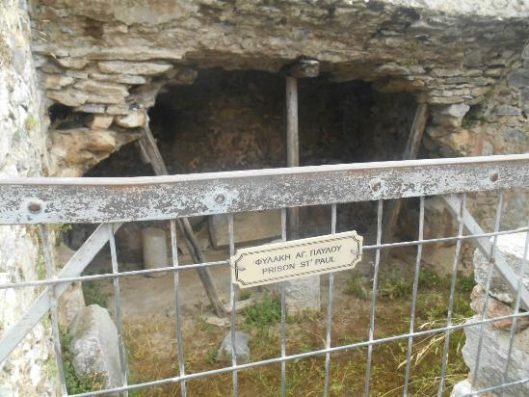 We pick up the story about halfway through Luke’s account of Paul’s and Silas’s visit to Philippi, that Roman colony roughly halfway between Jerusalem and Rome, about 120 km west of Gallipoli, not far from the sea coast of Macedonia, and which they reckon was a retirement village of sorts for Roman soldiers. Imagine a retirement village for U.S. Marines, or Australian Army vets, located somewhere in Indonesia, and you’ll get the drift. I suspect this was a place with a pretty high view of law and order—as witnessed in what put Paul and Silas in jail, their freeing of the slave girl. In a moment you’ll hear someone say ‘us Romans’, hundreds and hundreds of kilometres from Rome, deep beyond Greece and almost in Turkey.

Political theology: it suited this law-and-order town for Paul and Silas to be thrown into jail at the behest of slave-owners, who masqueraded their self-interest with the words of vv20–21:  “These men are disturbing our city; they are Jews and are advocating customs that are not lawful for us as Romans to adopt or observe.” All the big themes are right there: the fear of disturbance, the othering of Jews, the nationalist chauvinism of this émigré community. The scapegoating, the flogging, to settle the community’s fears. But the sham-justice of it all is unmasked when Paul turns it back on them in v37: “They have beaten us in public, uncondemned, men who are Roman citizens, and have thrown us into prison; and now are they going to discharge us in secret? Certainly not! Let them come and take us out themselves.” The moment for political theology is, I think, the apostles’ commitment to the good of this marginalised, abused woman, and their willingness to subvert these Roman political forms not only for her sake, but also for the colony’s sake: that these things like citizenship, and public justice, need to mean something authentic, not be used as masks for self-interest and self-soothing by the majority.

Evangelism: it’s tradition to see the jailer as falling on his needs and asking ‘what must I do to be saved?’ as his response to the miracle of the earthquake. But even though it occurs straight after the singing to God, it interests me that the earthquake is not directly attributed to God. And it interests me that the jailer doesn’t say that he is impressed by God: his immediate prior thought has been suicide, because in this law-and-order town of ex-soldiers, he had failed in his duty. There is a kindness in it when Paul shouted in a loud voice, “Do not harm yourself, for we are all here.” (Acts v28). I find myself wondering, then, if the jailer is asking, ‘sirs. What should I do next? They are going to kill me.’ Paul’s clever subversion of their process, spotlighting their hypocrisy and treatment of a citizen, may contribute to keeping the jailer safe. But to the jailer, Paul changes the subject: “Believe on the Lord Jesus, and you will be saved, you and your household.” (v31). Whatever happens to you and your family in this colony, start first with trusting Jesus Christ. I like how the apostles are politically savvy and love the jailer enough to both help his predicament and also to change the subject to the Christ whom the jailer could have had no concept of.

Redemption: An entire household came with the jailer. An entire household came with Lydia earlier in the chapter. Several households followed, according to the letter to the Philippians. I don’t want to read too much into that, in our highly fragmented and individualised society. Maybe it can only be one-by-one in Australia for a time. But God loves collectives. God loves people-groups. And maybe, just maybe, God’s work in your life can have a ripple in your people group much larger than that individualism.