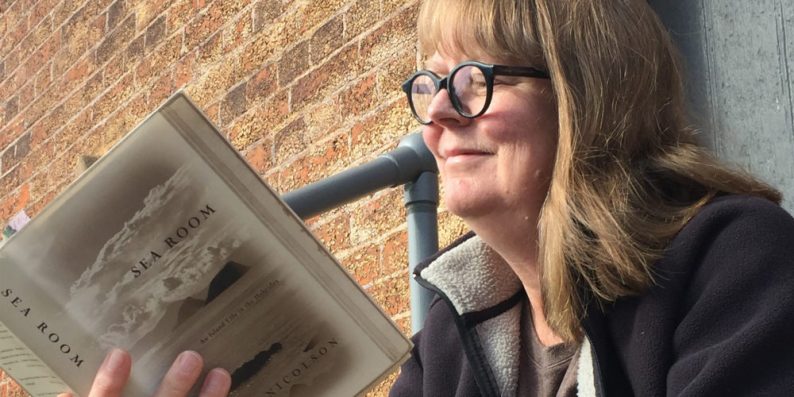 The rock that travels with us

My recent holiday morphed from a week playing with my granddaughter Peggy on a koala inhabited island in the Gippsland Lakes to a week of gardening at our rural folly, St Bernard’s, just outside Braidwood in NSW.  No surprise there – if nothing else, the pandemic has taught us to sit lightly with plans, especially of the interstate holiday kind.

At the beginning of the week, I cast around for something non-work-related to read and happed upon a book that had been loaned to us by a neighbour: Sea Room: An Island Life in the Hebrides by Adam Nicholson. Its attractive sepia-toned cover lured me in immediately: a photograph of a shimmering sea, small silhouetted islands, and a big, cloud-filled sky. So instead of visiting Raymond Island, Victoria, I spent my leave on the Shiant Islands, Scotland.

Improbably, Nicholson had been given the Shiant Islands, “five hundred and fifty acres of grass and rock” a few miles off the island of Lewis in the Hebrides, for his twenty-first birthday. His father had purchased the islands in 1937 for £1,400 when he was himself a twenty-year-old Oxford undergraduate. Nice for some, was my first thought. But Nicholson’s book – part memoir, part history, part natural history – makes it clear that he has never considered himself the “owner” of the Shiants. If anything, the Shiants have possessed him, seeping into and shaping his own sense of being. There is much that could be said about his reflections on the changing occupation, use, and ownership of these small groups of islands, but what I want to focus on is an extraordinary discovery that was made in the summer of 2000.

After more than twenty years of visiting and exploring these small, rugged islands, Nicholson had embarked on researching his book on the Shiants.  He wanted to know more of their human story: how the islands had been inhabited and abandoned over time, and how the various remains, the stone ruins, and the more subtle changes to the landscape, related to this story. So in 2000, after a preliminary survey, a team of archaeologists set to work at one of the habitation sites, consisting of a large house (40 x10 feet) with thick stone walls still standing 3 or 4 feet high and a couple of small barns, all enclosed in a courtyard. It was clear that this site had been a farm complex. During the brief two-week dig, a little of the changing fortunes of the farmstead during its final period of occupation from the sixteenth to the eighteenth century were revealed: periods of famine (marked by the bands of limpet shells, food for the desperate), periods of total abandonment (where the deroofed house began to fill with soil), and a final period of relative plenty (marked by extensions and improvements to the floor plan) before permanent abandonment.

It was in this final layer, dated to the mid-seventeenth century, that a young Czech archaeologist, Linda Cihakova, found what Nicolson describes as “the most beautiful man-made thing the Shiants had ever known.”  She had been carefully excavating a flat round stone, about 12 inches in diameter, from the clay and peat ash floor. Nicolson’s description of the discovery captures the revelatory moment:

Linda approached the stone with her trowel. On her hands and knees, she cleared the soil from around it and then with her fingers slowly turned the stone over to see what was underneath. It was heavy and as the stone rolled over onto its upper side Linda jumped back and away, shrieking at what she saw, holding her hand to her mouth. Deeply carved on the underside, the side which had been set down and buried in the floor, was a four-armed cross set within an equally firmly carved circle, just in from the outer circumference of the stone. (Nicholson, 2001, p. 146)

This discovery confirmed an undocumented but strongly held local tradition: the Shiants had once been the home of a Christian hermit.

The carved stone was dated as having been made somewhere between the seventh and tenth centuries: stones like this were used as grave markers in early Christian Britain, and had often been removed and treasured by later inhabitants. But it may well have had function prior to being a grave marker. Saint Columba, the founder of the monastery of Iona, was said to have slept on bare rock with a stone for a pillow, the very stone that later marked his grave. The sandstone from which the Shiant carved stone is made suggests that it is more likely to be connected to the monastery at Applecross (founded in the late 7th century) and its founder Maelrubhar, rather than Iona and Columba. (There is a tradition too that Maelrubhar’s grave was marked by a cross-engraved stone.) But either way, the carved stone reveals a similar story: the evangelisation of the Scottish islands by Christian monks, some living in community, some living as hermits among the local people.

What Nicholson doesn’t pick up in his book, though, are the biblical resonances that sit behind these cross-inscribed stones. Most obviously is the story of Jacob bedding down for the night on his way to Haran, using a stone for a pillow, and then dreaming vividly of angels climbing up and down a ladder that reaches from earth to heaven. In the dream, Jacob hears God’s voice, promising blessing and presence, and when he wakes it is with the realisation that the place where he has slept is holy: “This is none other than the house of God, and this is the gate of heaven” (Genesis 28:17). Jacob’s stone pillow is a reminder of this, and he sets it on its side, anoints it with oil, so that it becomes a marker of this place of divine encounter, now re-named Bethel.

However, the Shiant cross-inscribed stone also reminded me of another, slightly odd, passage from Paul’s first letter to the Corinthians (10:1-13). Paul is reminding his readers how easy it is to fall from the way of Christ. Look, he warns, even our ancestors, who had been blessed with liberation from slavery in Egypt and nourished miraculously in the wilderness, turned away and incurred God’s displeasure. Don’t go down that path!

Paul reminds them of the story they know so well, but he also recasts it brilliantly, with language that connects his readers of their own liberation, through the waters of baptism, and their own nourishment, in the food of the Eucharist. He continues:

For they drank from the spiritual rock that followed them, and the rock was Christ. (v. 4)

Behind the strange image of a travelling rock is the story of Moses striking a rock with his staff and of water gushing forth (Exodus 17:6; Numbers 20:7-11) and an extra-biblical legend that the rock had followed the Israelites around the wilderness, so that they would never again suffer from thirst. “And the rock was Christ” – here is the clincher. (To say nothing of the nascent Trinitarian theology here.) Christ is not only imaged as a rock, but as a rock that travels with us. A surprising, beautiful image.

Imagine, now, a monk making his way slowly across the sea in a small timber boat, traveling, in stages, from the monastery on the mainland that has shaped his adult life, to the Shiants. He’s a mature man, not a beginner in the way of Christ. He loves the people of the western islands; he was born here. He knows their stories and their struggles. He brings little with him. He knows, by heart, the psalms that he has sung and prayed with his brother monks over the years. He knows, by heart, the Gospels that have been read in the monastery oratory and pondered in his hours of prayer.

But amongst the few provisions stowed on board is a rounded stone, partly carved with a cross and the beginnings of a circle.  There will be time to complete the carving, God willing. And when he sleeps, with the stone as his pillow, he will remember that wherever he wakes, at sea or on land, this place is heaven’s gate: a place for meeting God, in Christ, the rock, that travels with us.